Steampunk as a literary style is based on ideas of authors like Jules Verne and H.G.Wells, who described future technology from the point of view of their time at the beginning of industrialisation in the Victorian era. The driving force of the time is steam – so steampunk books, films and TV series describe futuristic technology based on steam engines, mechanical gears and high-precision clockworks.

In Jules Verne’s classic novel “From the Earth to the Moon” (1865), Verne describes the construction of a cannon to shoot a hollow projectile filled with people onto the moon. Of course, no one at NASA considered building a cannon to shoot people to the moon. But let’s imagine for a moment that this 19th century idea had actually been advanced. Maybe then we would have huge, kilometre-long cannons all over the world with which to either shoot projectiles into orbit or even a projectile at another country. Then jet engines might never have been invented and civil aviation would be in airships. People who talk about faster-than-sound flying machines would be crackpots because one simply could not imagine an alternative to the current status quo. 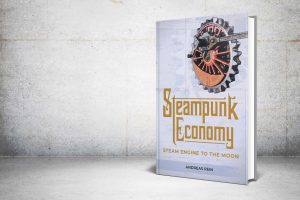 Steampunk does not only take place in technology, however, but also in basic economic assumptions. These are largely based on insights and findings from the 19th century.

The community of managers and top executives have developed a habitus without which one cannot make it to the steering wheel of the steamship. One recruits from a self-similar pool of people. If you want to get in, you have to have or adopt this similarity – this applies equally to women and men.  The problem is the trained understanding of the people and the suitably learned set of methods.

Let’s discuss how to proceed from left to right.