Think out of the box 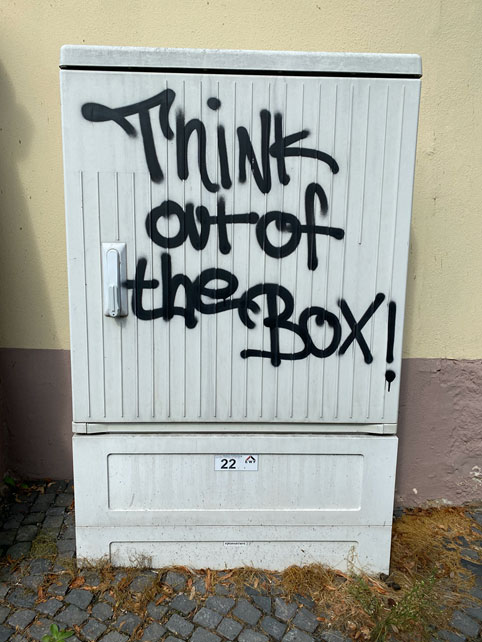 The sprayer from Fritzlar is right with his call – think out of the box. But why actually – what is so bad about boxes?

Boxes – i.e. brain boxes – classify – they help us to assign things to certain orders and to call up a behavioural programme that seems appropriate to the contents of the box. This is extremely helpful when moving in unfamiliar, uncertain terrain. Instead of having to constantly assess my situation after each step, the box is enough for me, from whose knowledge I can call up the appropriate behavioural pattern. If I have a sophisticated box system, I will feel safe practically always and everywhere – even when I am totally clueless. I will be able to assess situations, well, at least I will assess situations and make decisions that will have an immediate impact on me, the people around me and my environment. The never-ending stream of experiences and insights will be constantly checked against the box system and stowed away in it.

Where did I actually get my brain boxes from? The brain boxes are of course not physical storage places, but rather rules, little rules of thumb that help us make decisions extremely quickly. In psychology, we speak of heuristics. Heuristics are simple formulas that allow the heavyweight, energy-hungry slow part of the brain to be left out of the decision-making process. When my dog catches his stick, he doesn’t calculate the trajectory of the stick taking into account air resistance and wind direction (at least I hope he doesn’t), but uses a rule of thumb to adjust his running direction and speed. “I look at the flying stick. While doing so, I try to keep my head at a stable angle. If I have to turn my head backwards, then I am running too fast. If I have to turn my head forward, then I am running too slow. If I don’t have to move my head at all – I arrive exactly where the stick lands and exactly when the stick lands. Cool, right?”

When Captain Chesley B. Sullenberger took off from LaGuardia Airport (New York City) towards Seattle in January 2009, he did not realise that applying such a rule of thumb would save his life and that of all the passengers. 3 minutes after take-off, he flew through a flock of Canada wild geese and the engines failed. Aircraft engines are tested for bird strike by shooting frozen chickens into the running engines – these weigh between 500 and 1000 grams. Canada wild geese weigh 6 kg and there were many. Now, the standard protocol of a flight captain is to go through the appropriate checklist with the first officer, which is provided in case of total engine failure. Unfortunately, this checklist is based on the cruising altitude, i.e. about 12 kilometres. Sullenberger, however, was only at an altitude of 975m – you don’t start with a checklist there. Sullenberger applied the so-called gaze heuristic.

The tower sank downwards. Chesley B. Sullenberger decided to make an emergency ditching and landed in the middle of the Hudson River. Between the take-off from LaGuardia and the emergency ditching, a total of only three minutes had passed and no one was harmed. He then went through the checklist with the co-pilot. The applied heuristics kept him from activating his slow thinking, which would probably have robbed him of the time to make the life-saving decisions and initiate measures.

Unfortunately, heuristics also have a catch. Our brains use them so readily that we no longer check, or even consider, that the quick results could be wrong. Once our fast system has made a decision, it no longer questions it. Whenever our brain recognises a heuristic or pattern, it applies it and devotes itself to other tasks. So when our brain perceives things that run counter to the heuristics and known patterns, it tries hard to make the perception match the expectation – we squeeze it into a box, even if the box doesn’t actually fit. Example?

The car and my wife’s horse trailer together cost 15,000 EUR. The car costs 10,000 EUR more than the trailer. So what does the trailer cost? 5,000 EUR? That’s what the heuristic says. And it says it so overwhelmingly that we practically can’t think any more – our own brain blocks us. But do the maths – the hanger costs EUR 2,500. And just as heuristics force premature results on us, brain boxes push us to make premature assessments. In reality, we don’t look at every detail of our environment and then consider which box might fit. Rather, we only look at specific features and use them to assign the supposedly right box. And if there is actually no suitable box, then our own perception is bent.

Deciding with brain boxes makes us quick – but also inflexible. Crazy, isn’t it? Most people equate flexibility with speed. No, boxes make us fast and inflexible, because we don’t perceive changes in the environment and also don’t see that our boxes are no longer one-to-one. The heuristic only checks the subject of perception, never the perception itself. The rule of thumb asks what fits into which box, but not whether the box itself still fits. When exponential development leads to rapid change in circumstances, we are not able to adapt our heuristics and boxes quickly enough. This leads to fatal fallacies and misconceptions – from wrong economic decisions to spreading conspiracy theories, to xenophobia and hatred of anything that does not easily fit into one’s brain boxes.

So – those who need BrainBoxes should not only create them, but also cherish them and also make sure that there is a BrainDrain. After all, occasionally we have to rinse off the rubbish.